Up and Coming Neighborhoods in Chicago

Plan Your Weekend in These Local Hotspots

We’re all familiar with the uber-popular Chicago neighborhoods of River North, Lincoln Park or Wrigleyville. Yeah, these places are great, but along with their popularity comes sky-high rental prices, waiting hours to get a table at brunch, and don’t even think about finding street parking. Here are five up and coming neighborhoods in Chicago to take a chance on in 2019.

This one is a no-brainer. Anyone who lives in Chicago knows that Avondale is having a moment, and the internet has declared Avondale the next “it” neighborhood. Tucked in between the popular Logan Square, Bucktown, and Roscoe Village neighborhoods, Avondale lacks the pretentiousness of its neighbors, but is still rich in art, culture, and a flourishing food scene.

Traditionally the heart of Chicago’s Polish community, Avondale is a working-class neighborhood. As of late, its industrial character has attracted an influx of artists as well as a younger generation, looking to settle down and start a family in one of the area’s more affordable homes. The area is also culturally diverse, with a growing Hispanic population contributing to the neighborhood’s rich and eclectic cultural scene.

Another positive? Its convenient location makes commuting feel less like a nightmare. Running through the middle of Avondale is the Blue Line, with the Addison and Belmont stops flanking its northern and southern borders, making a trip downtown or to Chicago O’Hare just a train ride away. The Kennedy Expressway also conveniently runs directly through the neighborhood.

If Avondale sounds like the kind of neighborhood you’d like to settle down in, act quick; the area won’t be flying under the radar for much longer.

Located four and a half miles from downtown on the lower west side, Pilsen is a small neighborhood with big culture. It originated as the first stop for many Eastern European and Latin immigrants, and now encompass a vibrant art scene. Many buildings and homes are beautifully decorated with eye-catching murals and street art. Mexican heritage is strong here and is key to the strong identity of the Pilsen neighborhood. Not surprisingly, it’s home to the spectacular National Museum of Mexican Art. 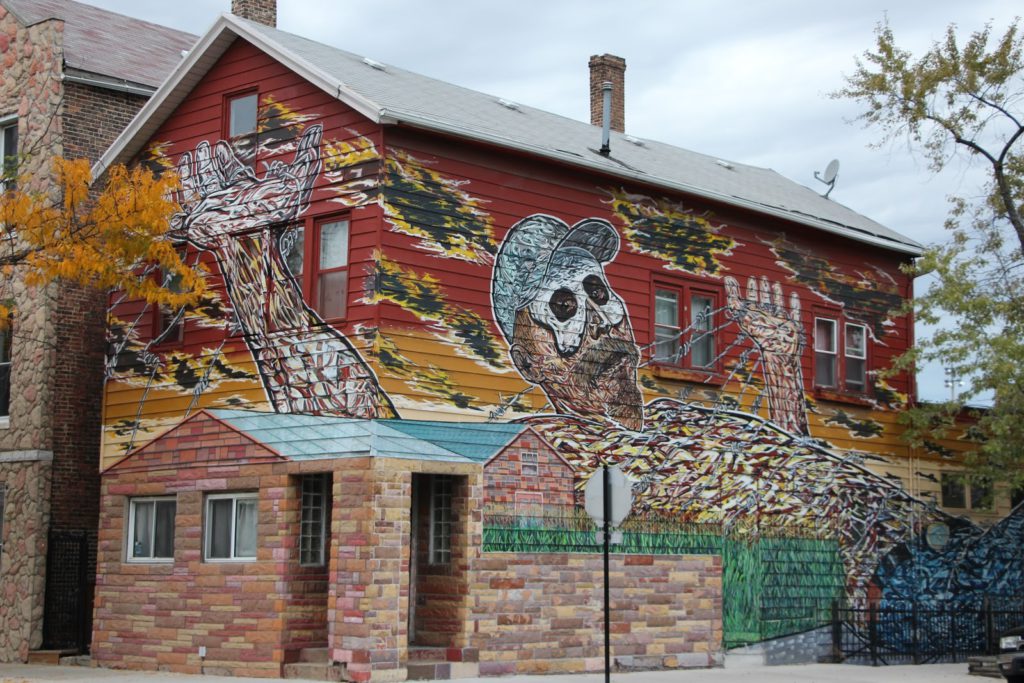 Murals and graffiti-clad buildings are a common sight in Pilsen

Similar to Avondale, Pilsen has been getting a lot of love from high-profile publications (this time, Forbes) as a place to see and be seen. The neighborhood is home to Thalia Hall, a historic music venue that was originally built as an opera house in 1892, while W 18th St. has food options ranging from authentic Mexican tacos, ramen bars, and everything in between.

Home prices have started to rise, with some homes recently selling for over $600k, but you can still get twice as much for your money in Pilsen than you would in Lincoln Park or Lake View.

Humboldt Park is to Puerto Rican culture what Chinatown is to Chinese culture or Little Italy is to Italian roots. Approximately one-quarter of the neighborhood’s residents are of Puerto Rican descent, and the area’s cultural murals and architecture represent that. One of the most popular festivals in the city, the Puerto Rican People’s Parade, is hosted in Humboldt Park every year and draws crowds upward of one million people.

Originally named for the German naturalist, Alexander von Humboldt, Humboldt Park has gone through many cultural evolutions since its founding in 1869. Throughout the years, the neighborhood has been home to Scandinavians, Germans, Poles, Italians, and Russian Jews before welcoming a wave of Puerto Ricans in the 1960s.

Since bottoming out in 2012, Humboldt Park has seen rapid increases in home prices in the last year. The median price of Humboldt Park homes is up almost 45 percent this year, but homes are still relatively cheap compared to prices in neighboring hot spots such as Logan Square and Wicker Park.

Possibly the most up and coming Chicago neighborhood on our list is Woodlawn. Neighboring Hyde Park is known for its cultural diversity and is home to the University of Chicago and many notable scholars, including President Barack Obama. But Woodlawn? Not so much. Once plagued with gang violence, Woodlawn personified the reputation of South Side Chicago: dangerous, economically disadvantaged, and run down.

That’s not the case anymore. After decades of significant population loss, people are starting to return to Woodlawn, including those with plans to invest in the neighborhood — most notably, the Obamas. The Obama Library has become a major catalyst that has inspired additional development in the area, and the neighborhood’s beautiful architecture and structurally-sound brick homes provide added appeal. 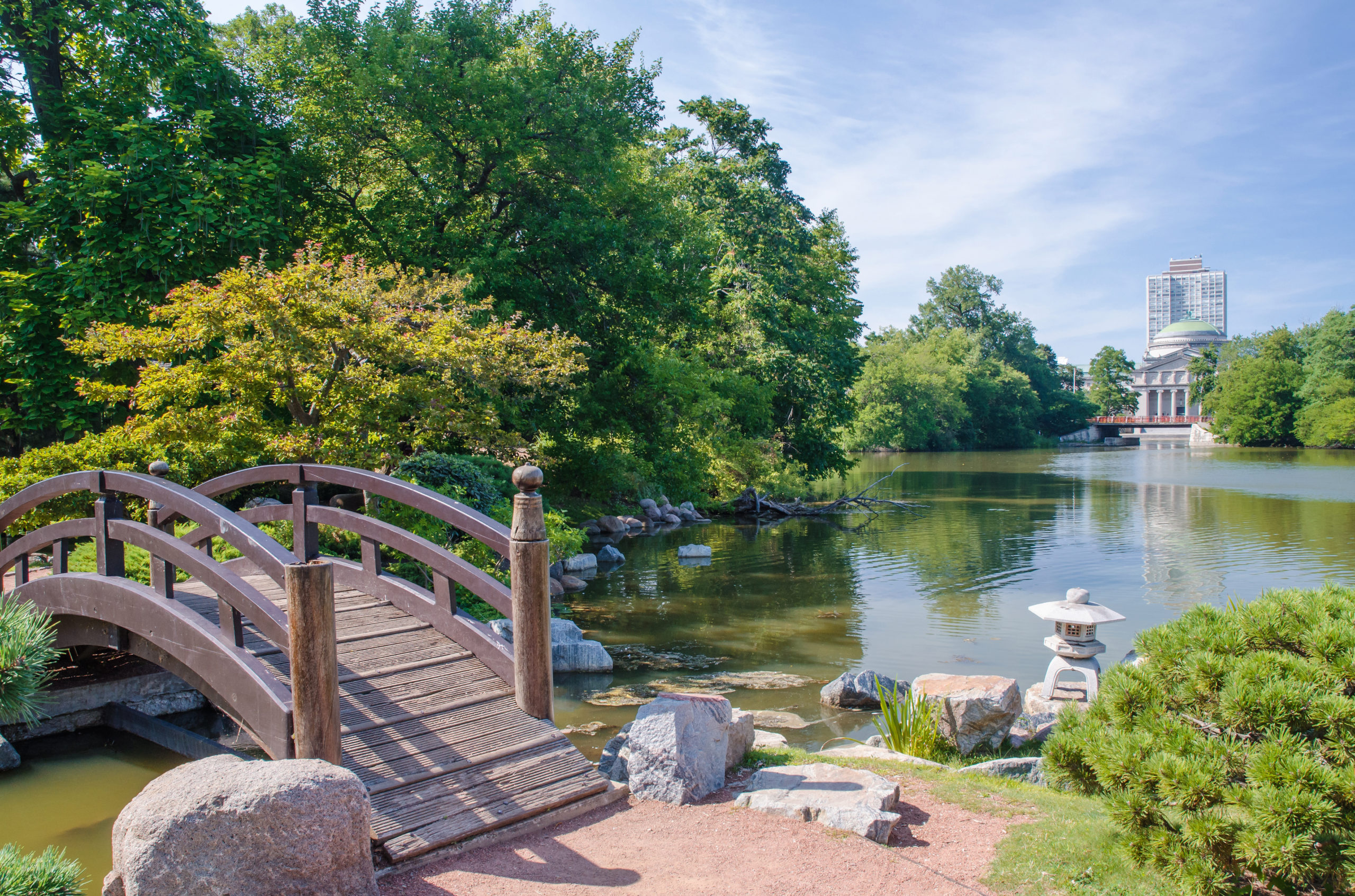 Jackson Park which borders the Woodlawn neighborhood, remains a little piece of paradise in South Side Chicago

Another reason to love Woodlawn is its location. It’s a lakefront community and is surrounded by two of Chicago’s most beautiful parks: Jackson Park to the east and Washington Park to the north. The Green Line, as well as the Metra, also has multiple stops in the area, making commuting in and out of the city convenient. Not to mention its close proximity to Hyde Park, an added draw to potential investors and home buyers.

All of these factors make Woodlawn a neighborhood ripe in potential, and buyers are starting to take notice.

West Town is probably one of the more “established” up and coming neighborhoods on this list. Named for its location in proximity to downtown Chicago, West Town is three miles west of the city. Technically, West Town is a district and encompasses some of the more popular Chicago neighborhoods (we see you, Wicker Park), but we’re specifically looking at the smaller communities of Ukrainian Village and East Village. 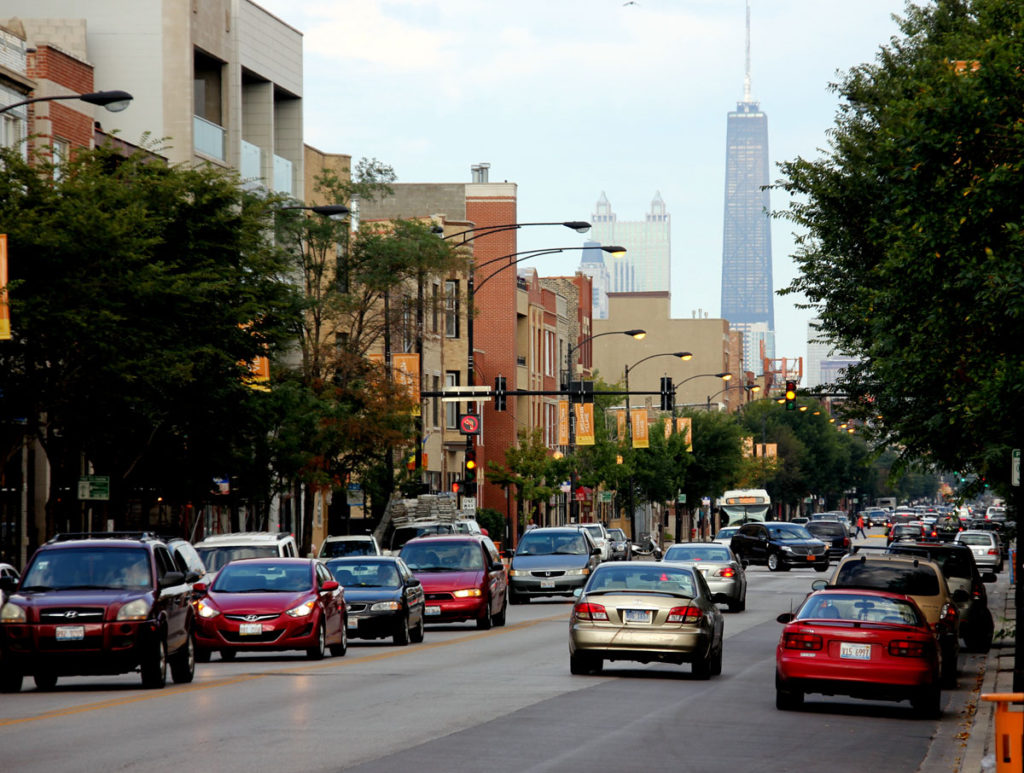 These areas are especially popular among young professionals, looking to take in the creative energy of the area. West Town has no shortage of hip restaurants, funky galleries, smaller music venues, and quaint cafes. Even with endless wining, dining, and entertainment options, West Town still manages to hold onto a low-key, laid-back vibe.

West Town is definitely one of the hottest up and coming neighborhoods on the block, so if you’re looking to buy or rent in the area, don’t miss your shot on Chicago’s next most popular neighborhood.

There’s no shortage of housing options for those moving to the Windy City, especially with ever-changing neighborhoods. In fact, while other big cities in the US are in the midst of housing crises, Chicago’s rent prices have dipped more than 15 percent since 2017.

Trying to find the right Chicago neighborhood for you? If you’re relocating to Chicago and need more information about the area and how to start your search, we can help. At Station, our agents are local experts. We can help you find the best place to live and the best place to grab dinner in your neighborhood. Get in touch with us today to learn more about how we can help you with your move.

Station Cities is excited to announce that Madeleine Pearl and her talented team of agents will be joining the team in the Chicagoland area. Madeleine … Read more ⇢

10 Things to Know Before Moving to Chicago

Here’s your crash course in Chicago: this city of nearly 3 million is located on Lake Michigan and is the third largest city in the United S … Read more ⇢